A ‘Deadly’ Keelback
(Or how important it is to treat every snake as being highly venomous!)
Story & picture by Rolf

12.45pm, my toasted sandwich lunch was ready to be enjoyed when the location manager at work approached me with the news that there’s a snake in the hallway!

As a keen snake rescuer I immediately dropped everything and checked it out. At a very careful first glance around the corner I was stunned by the beauty of the scene: the pale olive green snake with its head slightly risen and its body in a perfectly waved shape lying on the marine blue carpet in the long hallway… not moving – still like a painting.

“Rolf! Get your bag and catch it immediately!” the location manager whispered impatiently. Oops! Yes of course! I ran to the car keys to grab my snake gear and by the time I was back, gear in hand, the snake had moved into the nearest office with desks, filing cabinets, book shelves and all sorts of stuff on the floor!

Jack*, one of the guys who came to see the spectacle, used to live in remote areas in Arnhem Land and the Kimberleys for years. He has some experience with snakes and is used to them. He tried to approach it for a closer look and it took off. It would have been fairly easy to catch the snake in a corridor but definitely not in a well used office!

Fortunately Jack and the location manager cornered the snake behind two filing cabinets so we could clear the area around it and prevent the snake from finding an even worse (for us) location to hide.

I wasn’t quite sure what kind of snake it was but Jack was sure it was a non-venomous Keelback. His wise words to the people watching during the process of catching the snake were: “Don’t worry, if you get bitten it’s only a Keelback – it won’t hurt much.”

We spent about 10 minutes chasing the poor snake from one side of the filing cabinet to the other and it just didn’t want to go into the secure snake bag that I offered. Of course it got more and more agitated and defensive. It ‘fake-attacked’ the hook that I used to guide it into the bag by striking towards the hook but never touched or tried to bite it. Again I was impressed, this time about the snake’s behaviour – being in an unfamiliar environment, cornered by three huge individuals, chased around this narrow space and all the voices and smells… but it still was not prepared to use its only weapons – it’s fangs.

Finally Jack and I got the snake into the safe bag and relocated it a few hundred meters away from the office where it could hide.

When released it just got out of the bag and again lay still with its head slightly up checking out the environment. That’s when we took this picture that I sent to Cheryl who confirmed what snake it really was – an Eastern Brown! Beautiful, peaceful, soft and deadly.

(* true story but fake name so he doesn’t get embarrassed!) 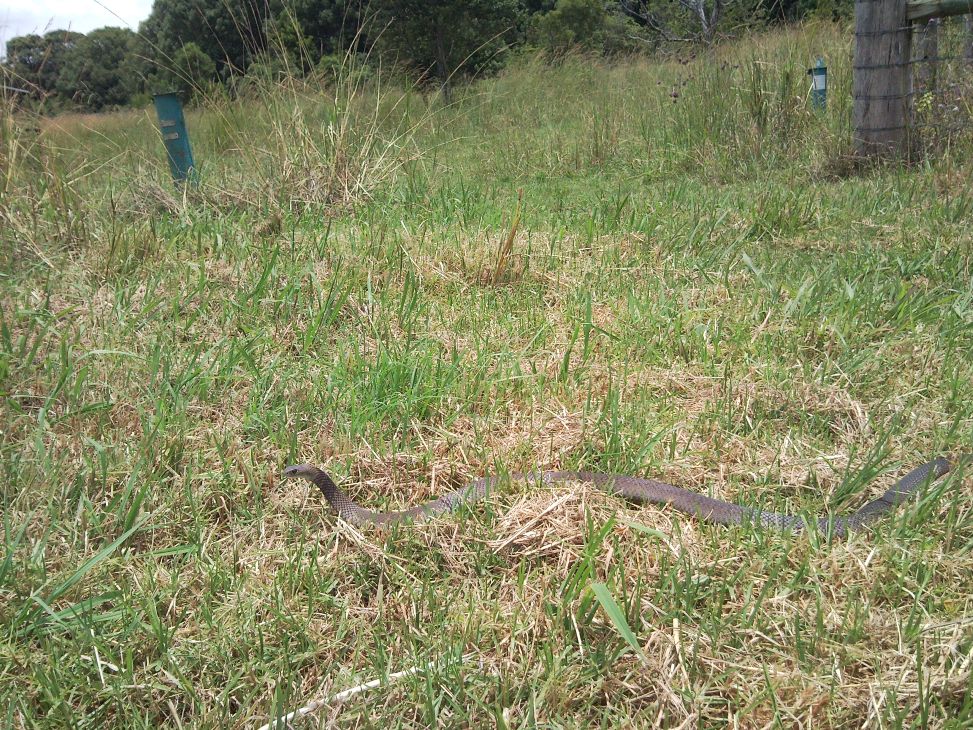