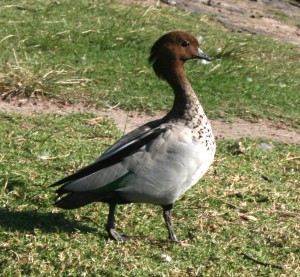 Picture by Rowan Wigmore.
An Australian Wood Duck (not the one in the story)

Late one Sunday afternoon, a mother and daughter were returning home to their Coorabell farm. Along the way, on the Caniaba Road, they noticed a wood duck, injured and unmoving. They paused in their journey to gather the bird, wrap it in the daughter’s coat and phone WIRES for help.

WIRES could not find a rescuer and passed the job to Renata on the NRWC Hotline. Renata called me and with her calm approach persuaded me to take on the job. (My first response had been less than positive as I was watching the rugby league.) I met Lynn and Jaime at an arranged location and they handed over the duck. They obviously cared about the duck and I told them what the possible outcomes were. They nodded when I mentioned Keen Street vets as they were the vet they had used for their dairy cows.

Next step was to examine the duck in the safety of my home (in front of the rugby league – volume muted). I am not entirely comfortable with handling animals but I was advantaged in having attended the Introductory Course (presented by Chrisy Clay and organised by Jo Shepherd). There was a significant abrasion on the beak, a swollen left eye, messed-up feathers on the right wing and some abrasions on the legs. The bird could control its head but was not struggling. Could I have done better on the examination? Of course, but each time I do this I gain a little more experience and confidence.

It was now the right time to contact Cheryl, my Area Coordinator. I described the history and injuries to Cheryl and she advised me to keep the bird warm, dark and quiet overnight and to take it to the vet in the morning. Predictably, I had to ring her again a short while later. Should I clean the abrasions? Cheryl advised not, it would be better to allow the duck to rest.

To wrap it all up, I called Renata to advise the outcome. Renata was unavailable so I spoke with her partner who took the details.

What can be garnered from this case? Firstly consider the number of participants, at least 13 persons were involved: Lynn and Jaime, the WIRES operator; Renata and partner, my partner and me, Cheryl, Chrisy, Jo and all of the other helpers at the Introductory course, the Keen St examining vet and receptionist; and of course a carer for the duck.

This clearly shows that wildlife caring is a team exercise and that there is a need for all of the components of good teamwork: communication, respect and courtesy, an appreciation that every member of the team has different capabilities, a willingness to help out and a commitment to improvement.

Secondly, in caring, you get to see the better side of people. Lynn and Jaime delayed their journey to ensure the duck was looked after. Renata and Don took on the tough job of mustering the troops on a weekend. Chrisy and Jo worked hard to present a course to educate new carers. Cheryl is always there when you need her.

Last but not least, the Keen St Vets provide willingly of their time, skills and facilities.
In conclusion, I have been involved for about a year and have done rescues, Currumbin runs, occasional care and sausage sizzles. I don’t know what the future holds but I do know that participating in NWRC has had many rewards:
I have met some very good people (important for me as I am new to the area). I have engaged with wildlife at a far more profound level than I ever have before; and I have had the chance to engage in an educational role with the public.

PS. The Hotline just called and said that Keen St had examined the bird and asked that it be held a few days.