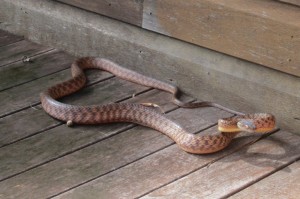 As the weather warms up, Northern Rivers Wildlife Carers are getting lots of calls regarding snakes. The points below give some general advice on what to do if you see a snake…..

• If you see a snake outside, stand still, then slowly walk away from it, they are short sighted and chances are they haven’t seen you but will pick up sudden movements or vibrations through the ground.

• Keep children and pets away.

• Observe the snake from a safe distance and call the Northern Rivers Wildlife Carers for advice on 6628 1866.

• If working outdoors or bushwalking always wear long pants and closed in shoes. Snakes live in a range of habitats, so even during your trip to beach you need to be aware when walking through the dunes.

• During the warmer months, don’t walk around your backyard in the dark barefoot or with thongs on. It’s surprisingly common for people to step on snakes at night, and during summer snakes can still be out and about after sunset.

• If you find a snake in your house do not disturb it, leave the room, close doors and jam a towel or something similar under the door to prevent it escaping, call the Northern Rivers Wildlife Carers. If snake is contained in a room it will be much easier for a snake handler to locate and remove.

• We get many calls for brown snakes, however there are over six species of snakes in the Northern Rivers that are brown coloured but only two are considered dangerous, the Eastern Brown snake (which is seen all over the area) and the Rough Scaled snake which is only seen in rural/ forested areas.

• The colour of some species of snakes can vary greatly, so colour is not a reliable way to identify them.

• Snakes only live where there is food, shelter and water. Keep lawns short and paths clear, and don’t leave piles of rubble, iron or timber lying around in your backyard. Store things away, up off the ground if you can. Gaps in rock retaining walls should be concreted, particularly if the wall is close to your house as snakes will love to bask and hide within them.

• If you have birds or chickens it’s really important to keep rodent populations under control. Don’t leave grain or seed lying around that will attract mice and rats, as they in turn attract a number of different snake species. Chook pens, bird aviaries and rabbit hutches all need to be wired with 1cm squared wire and have no gaps – you would be amazed at how small a gap a carpet python can squeeze into!

• The majority of snake bites occur either when someone accidentally stands on one, or if they try to harm or kill the snake. Bottom line, watch where you put your feet and if you do see a snake – leave it alone and it will give you a wide berth.