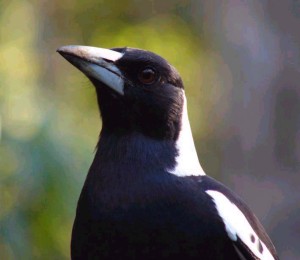 Spring has arrived, and the Northern Rivers Wildlife Carers are preparing for ‘magpie swooping season’. It’s this time of year when some magpies defend their nest from cats, dogs, other birds, even people; swooping them if they come too close.

“Every year the Northern Rivers Wildlife Carers receive many calls regarding swooping magpies, and it appears that swooping is more aggressive and prolonged in built-up urban areas”, says spokesperson Chrisy Clay.

In urban areas, magpies can also feed on food found in garbage bins, parks and playgrounds and are also often fed directly by residents. Consequently, these urban birds need much smaller territories to sustain themselves and live in closer contact with other magpies. These cramped territories are thought to significantly heighten their protective, swooping behaviour to the point where anything or anyone entering the area is seen as an intruder.

“What’s really interesting, is that research from Griffith University has also found that many magpies that swoop pedestrians, can repeatedly choose similar looking individuals”, says Chrisy.

The research suggests these magpies may have had a negative experience in the past. Someone may have thrown rocks or sticks at them or have harmed their chicks and they have swooped similar looking people ever since.

“For those reasons we are asking for a degree of tolerance from the community”, says Chrisy.

“It’s important to remember that not every breeding magpie swoops, and there really are very few options for managing the behaviour. Relocation is not an option as magpies are territorial and to release a bird into another’s territory will result in their death”, says Chrisy.

In extreme cases, some magpies are euthanased because of the danger they pose to pedestrians.

“However research has identified any benefit is likely to be short-lived. The vacant territory will be quickly taken over by another magpie and given the same set of circumstances it is likely to also swoop next breeding season”.

There are a number of ways you can protect yourself from swooping magpies during this time. Firstly, be aware. From now until the end of October and sometimes into November, magpies are breeding and some may swoop. Identify areas where magpies are swooping, and avoid them if possible. If it is not possible, protect your head and eyes when walking in these areas, the best protection being an open umbrella. 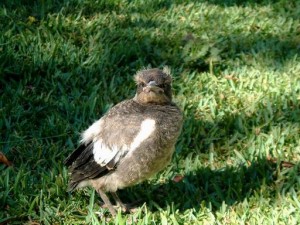 “Thankfully, swooping season is relatively short-lived, usually only lasting six weeks. For the most part magpies are relatively harmless and easily defended off with an umbrella”, says Chrisy.

To assist with identifying areas where magpies are swooping the National Parks and Wildlife Service and Northern Rivers Wildlife Carers have temporary signs that can be erected.