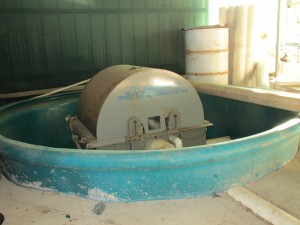 The tub ‘Splash’ was found in 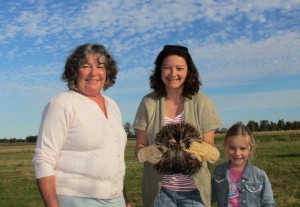 Release day for ‘Splash’ the echidna was a special day for property owner Cheryl and Northern Rivers Wildlife carer Chrisy.

Splash was a very unusual case, he was rescued from a disused aquaculture tank on Cheryl’s property at Tucki Tucki. It’s likely, judging from his condition, that the echidna had been stuck in the tank in shallow water for a number of days, before being discovered. Echidnas are quite good climbers but the smooth, deep sides of the tank prevented it from getting back out. Thankfully they’re also proficient swimmers, a skill which no doubt saved Splash’s life.

When Splash was rescued, he was tired and weak, and had picked up a very severe skin infection from being in the water for so long. He has also lost most of his fur.

The echidna was transported to the Currumbin Wildlife Hospital for a thorough assessment to ensure he had no further injuries. Once the skin infection was responding to treatment, Splash was brought back into the care of NRWC member Chrisy. Here Splash stayed for a further two months whilst his skin slowly healed and he returned to strength.

Returning Splash back to Cheryl’s farm on the banks of the Wilsons River was a rewarding occasion, but the animal had left his mark on its carer, with Chrisy saying that she would miss the cheeky echidna.