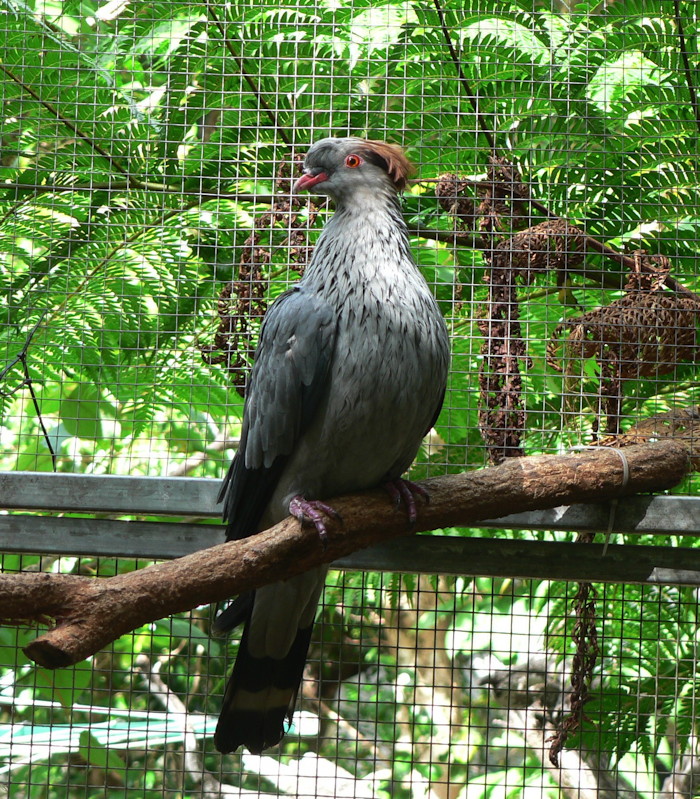 In the North Coast hinterland, we often see large flocks of Topknot Pigeons which fly at great speed through the area in search of ripe rainforest fruit.

Often you can hear them coming well before they even clear the tree line, with their rapid wing beats creating quite an amazing sound. A very large bird with an unmistakable swept back hairstyle, they are completely arboreal and gain moisture from raindrops on trees. Although locally they are not rare, wildlife carers rescue very few.

“Elvis”, pictured here, was rescued from a property at Goonengerry. He was found on the ground very underweight and unable to fly because several flight feathers were missing on one wing. Our best guess is that he was attacked by a bird of prey and being unable to fly, couldn’t find food.

After a check up at Currumbin Wildlife Hospital, where the vet nurses gave him the name “Elvis” he returned for a stay in a large flight aviary with Northern Rivers Wildlife carers. Fortunately he fed by himself straight away, consuming bowls of fresh fruit and protein supplement daily.

He was in care for five weeks before his feathers had grown long enough for him to fly again. By six weeks Elvis was flying well and ready for release. He was taken back to the ridge top property close to where he was found and he flew strongly to a nearby tree.

It’s an honour to give such a beautiful bird a second chance.